If the best advertising really is a sterling reputation, then our advertising is top-notch. Attorney Richard H. Rizk has been practicing disability law for over 20 years and has earned the trust of hundreds of clients who have had their disputes resolved through his expertise and understanding of long term disability insurance law.

To say that by having Richard Rizk adjudicate an insurance claim was a serendipitous event is an understatement. My wife, a registered nurse, was seriously injured. Three attorneys, upon separate accounts over several years, failed to achieve monetary compensation. One attorney, who knows Richard from law school, recommended his firm.

What three attorneys could not accomplish over a decade, Richard was able to establish a satisfactory settlement from a large insurance company within a year’s time. At no time did we ever encounter pressure from Richard. He knew that my wife had a legitimate claim and had been wronged. Knowing this, he accepted the case upon consignment; the other lawyers required standard fees. He will not prolong a case for monetary reasons.

Usually as one hears the word lawyer, many pejorative words and images enter into thought and conversation. Richard Rizk has surely negated all ill thinking and we have nothing but honorific praise for this very well established attorney.

He is a client’s hope — an honest, non-greedy, and very warm personable lawyer. He definitely knows the methods of powerful insurance firms and how to untie the knots they use to bind claims for no action. We would turn to him for legal advice when and if needed, and will strongly recommend him to others in need of such legal counsel.

Excerpts from Joel and Berta McKaid:

Joel Mckaid, had a long term disability claim with Unum which was denied. Richard was able to settle the claim for an unspecified sum after filing suit against Unum. Below are excerpts from a testimonial Joel and his wife Berta provided.

We feel Richard Rizk is trustworthy and very knowledgeable. If we need a lawyer we would hire him again. He was honest and upfront about all the possible outcomes and options in my situation … It was a relief to have him on my side, as I no longer needed to worry about dealing with the insurance companies. He explained the entire claim process in detail and answered all my questions in a fashion I could easily understand … Without his help I know I wouldn’t have gotten fair treatment dealing with the insurance comapny on my own.

I would highly recommend Richard to anyone looking for an attorney who is dedicated, professional and honest. He took the time to always call or email me immediately. He really took my situation seriously and worked extremely hard to settle my case and get me a good amount of money. Richard listens to every detail of your situation and is so caring and understanding (which is rare with any attorney). Richard helped me stay positive when feeling low, and encouraged me to stay strong.

A nurse had contracted a virus while overseas. This virus was difficult to diagnose and her doctors disagreed on its cause. As a result, the disability insurer claimed that the nurse was not entitled to disability benefits. In response, the nurse contacted Richard Rizk, who suggested the nurse prepare a video in response to the insurance company’s demand for education information. After viewing this video, the disability insurer rescinded its denial and paid full benefits.

Where Claims Examiners Go For Help

Richard Rizk is the attorney claims examiners themselves go to when their own employer denies them long term disability benefits. From 2009-2010 he represented and successfully resolved the case of one who had worked with The Standard Insurance. And in 2011 he is working to resolve a claim on behalf of a former Aetna disability claims examiner.

For more information on Richard Rizk go to: www.rizklaw.com. 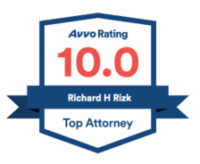 Sign up today for a
FREE disability appeal evaluation!

For a confidential evaluation to determine whether or not your case qualifies for a no upfront cost contingency fee arrangement, please enter the following information.

We respect your privacy. We will not share your email address or any personal information for any reason other than to help you with your claim.

We respect your privacy. Mydisabilityappeal.com (MDA) collects, uses, and protects information obtained from you on this website. We ask for only the information we need to provide the service you’ve requested. MDA does not use or disclose information about you or information that you may give us, such as your name, address, email address or telephone number, to any outside companies or parties. We do not rent, sell, or trade any of our mailing lists. MDA provides individuals with the right to opt-out of receiving email marketing and to update, supplement or delete their own voluntarily submitted personal information which MDA uses for the previously noted business purposes.
Go to Top